You are not connected. Please login or register
3 posters

this game couldve made me cry. Ill comment it after somebody has found the "flaw/joke" in this screenshot...
pantalonesco 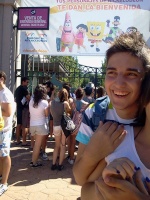 I was telling you that was the red amumu, but then i saw annie and... lol
Siân

got a problem with spidermumu? ._.

Annie was such a fool. Nothing new to experience in ranked, but I really thought we were gonna lose that one. Lee gave Akali 3 kills in the first ten minutes at top (about that thing called direct counter, ehh, what?) and Wukong was doing just as bad. Annie did a decent job just as Sona n me at bot.

The score was like 13/10 in our favor till minute 25, we got all dragons bc mid and bot were outplaying the enemies when things went down da hill..

Them bitches, as in Annie and Lee started to "invade" the enemies' jungle..guess what Annie and a feeding Lee can do in their jungle...yes, get caught and feed. Instead of stopping that shit they kept getting caught and Annie started flaming and insulting, selling her AP items n buying trinity instead. I thought I was going mental, bc we still couldve won if Annie didnt start doing shit. I put Annie on ignore then or otherwise I wouldve considered ragequittin r summit D:

After failed surrender votes I convinced the team to GET THEIR SHIT TOGETHA and catch them at the baron after they almost aced us at our mid inhibitor. Successfully we aced them back, got baron and pushed till their mid inhibitor, god knows how we've done that. Or wait, it was probably me with the enemies' inability to focus me down. After 2 more aces we finally got thru to their nexus and BOOM - oh dear, we actually won it.
Sponsored content